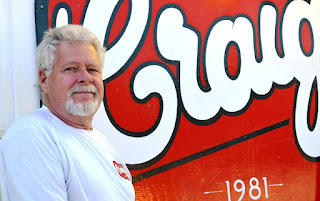 "I was born and raised in Miami and my parents bought a trailer in Key Largo Trailer Village in 1968. I was 11 or 12 years old. We started coming down as weekenders, like a lot of other people; we would put the little boat in on Friday and run it until Sunday afternoon when we put it on the trailer and went back home.

I started working in the restaurant business washing dishes in High School. Before I graduated, I had worked in a gourmet restaurant, a pizza place, (Anthony's, who also had a restaurant in Key Largo and Tavernier Towne), and IHOP. After I graduated I went to Culinary Institute of America in Hyde Park, New York and earned a 2 year associates degree. I came back to Miami for a while and ended up working at Plantation Yacht Club in the Keys. That was in about 1976.

In 1978 I went to work at The Pilot House. It was, basically, well.... we would pull a pool table out. We turned it into one of the most successful restaurants in Key Largo inside of 3 years.

In 1981 I parted ways with The Pilot House and started Craig's here on Plantation Key. We have been open 34 years! My favorite saying is 'It is a jail sentence with no possibility of parole!'

We are famous here for our fish sandwiches which come on whole wheat bread, tomatoes, tartar sauce, and cheese, like a grilled cheese sandwich. Let me tell you how that started.

We originated the fish sandwich at The Pilot House in Key Largo in, probably, 1979. Back in the 70's people didn't eat dolphin, dolphin was a garbage fish. The predominate fish was Grouper, there was an abundance of Grouper and that is what we served. We had a fish cutter that we would pay ten cents a pound to have the fish cut. His name was Harvey. Harvey lived on a big black boat at Port Largo Marina. It looked like the arc.

Harvey was a dumpster diver. He didn't need to be, he was medically disabled so he had full benefits. He didn't need to dumpster dive, but he did. Every morning, on his way to The Pilot House to cut fish, he would stop at the Winn Dixie dumpster. He would get out of date bread and out of date eggs, whatever vegetables weren't rotten. He would come to the restaurant, put his 'finds' in the walk-in, and cut fish. He would take his 'finds' home with him in the evening. As everyone knows, back in the 70's and the 80's, the Keys were everything you heard about in a Jimmy Buffet song, so, in the evenings Harvey and his friends would sit around smoking what you smoked in the 70's and everyone would get the munchies. Harvey would take the cheat meat he had from the fish and he would cut it up and sauté it with whatever vegetables he had; onions, mushrooms, zucchini, bell peppers, whatever he had gotten from the dumpster and he would scramble eggs into the concoction and they would eat it on whatever bread he had.

People started coming to the restaurant from the boat yard asking for one of Harvey's fish sandwiches. Now remember, this was 1978, you only got fish two ways, broiled or fried. When the owner came to me and said he wanted to make these fish sandwiches for these people, I said 'if you think I am grilling fish and vegetables and scrambling eggs into it you're out of your mind'. We were way too busy to cook like that!

There was this girl, Sue, who worked behind the bar. Well, when Harvey would make this concoction at the restaurant she would have me put it on a grilled cheese sandwich with whole wheat bread. I told the owner 'We have tomatoes here for the cheeseburgers, let's take the friend Grouper, put tomatoes and tartar sauce on it and put it on a whole wheat grilled cheese like Sue liked it'. He told me to make him one. I did and he loved it. We put it on the menu. Inside of 90 days it became 60% of the business. It went through the ceiling. I have been in the restaurant business 45 years and have never seen anything like it; a single recipe that took off like that! You can't patent food, so this sandwich is served, with minor deviations, at restaurants all up and down the Keys. There is even a restaurant in West Palm Beach that serves them! To this day, here at Craig's, it is 40 - 45% of our business.

That is my take on how The Harvey's Fish Sandwich came to be, and I know it as being fact, because I was there!"
at 5:28 AM

Email ThisBlogThis!Share to TwitterShare to FacebookShare to Pinterest
Labels: Business of the Keys