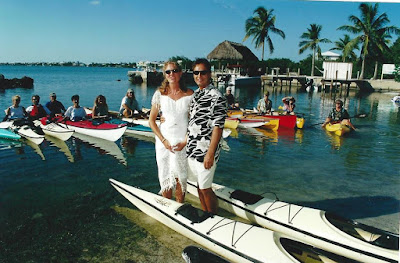 "I have lived in the Keys for 24 years. I am one of those that came down after Hurricane Andrew from Homestead; our house wasn't destroyed but needed repairs and we figured if we fixed it up we could sell it to someone that needed to stay in Homestead and we could move to the Keys. We found out how much nicer it was if we moved just 30 minutes south!
When I got divorced, I came here to this kayak shop because my ex-husband had bought my kayak at this shop and I thought I might be able to find people to paddle with. I had just moved to Key Largo from Islamorada. I found a guy that I had met on the water, but every time I tried to arrange a paddle outing he had an excuse why he couldn't go. Frank, the owner, was listening to all of this and after 3 trys to get this guy to go paddling with me (just for fun, not a date!), Frank said he would go with me. He closed the shop that afternoon and we went paddling.
Frank and I had a great time out paddling. We started in daylight and took it into the evening. We paddled through Garden Cove, into Largo Sound, and around by the Marriott and stopped and got a burger and beer. We just chatted all evening, all of a sudden, I had a boyfriend. I wasn't looking for that! We started dating.
At one point I didn't like my job, so I decided to hike the Appalachian Trail; it had always been kind of a dream of mine. Frank and I sort of broke up and I moved back home to Washington DC and spent a year researching the trail and saving money living at home. We stayed in touch, we tried to break up, but we obviously still loved each other.
I planned my hike and left in the Spring of '99, a 6 month hike, me and my dog. Frank flew up and did the first week with me, but had to return home to mind the shop. The Appalachian Trail is a totally doable adventure, it isn't extreme; you don't need any special equipment or skills. There is some uneven trail and rock scrambling, but it is totally doable; it is a path, really, through the woods. People are concerned when a women wants to hike by themselves, but I wasn't by myself, I had my dog, a Golden Retriever, and was probably more safe with him than a person!
I finished the trail and was trying to figure out what to do with my life. I had been park ranger, I had been a teacher, and I had worked with Frank at his shop a little. Frank assumed I would come back to the Keys but I wasn't sure I wanted to come back to the Keys and live with Frank and his son. He flew up to me and asked me to marry him. Wow! I said OK! I came back, we planned our wedding, and we were married in May of 2000.
I couldn't find a dress I thought was appropriate. Frank and I were in Key West walking down Duval Street and he pointed at French Kiss (a xxx store) and suggested we go in and look for a dress. I said 'No way, I'm not going to find a wedding dress in there!', but he said they had dresses too, so we went in. I couldn't believe it, but I found the perfect dress; in a sex store!! I have had 5 friends borrow it and wear it for their weddings!
We had a kayak wedding. I think it was the first kayak wedding in the Keys, unless someone can tell me different. We wanted it to be a party on the beach. We were married at American Outdoors where Frank first worked when he came to the Keys. We arrived at the beach in kayaks, we had friends who paddled with us and friends who met us there on land. We had a paddle arch we walked through, beer in a canoe, flowers in a kayak, a hammock for gifts. It was a complete theme and it was fun!
My mother in law had left my dog at home. When we got out of the kayaks I asked where my dog was and she said he looked unhappy so she left him at home. I said he was unhappy because he isn't with me! A couple of friends went and got him and he attended our wedding!"
www.paddlefloridakeys.com 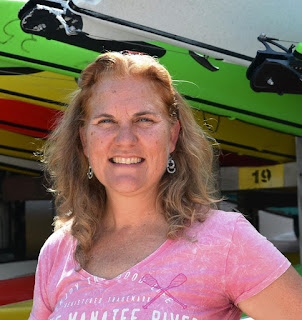