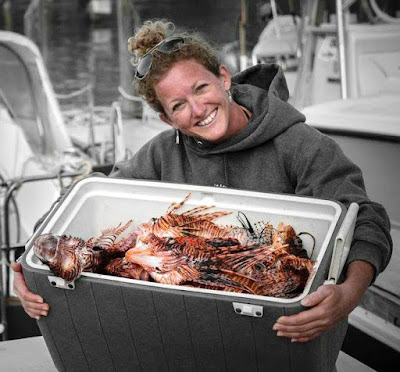 "I have lived in Marathon for 14 years and am originally from a little town in North Carolina.
I have been exclusively spearing Lion Fish for 3 years now. My friends and I brought in about 7500 lionfish last year and we are on target to do much better this year! We spear in water from 80 feet to 200 feet and we work on reefs and wrecks.
We have noticed a decline in lionfish this year in the areas we work. I collect and submit population data on lionfish for the FWC (Florida Fish and Wildlife Conservation Commission). The trappers (lobster and stone crab) are telling us they are not finding the amount of Lion fish this year they have previously either. That is great!
Our reefs here in the Keys are basically the nursery for the entire ocean, it is extremely important to keep the lionfish out of it. The reefs are where fish go to make other little fishies! Lionfish can eat 20 fish in 30 minutes. They do not get full. Scientists have observed them in tanks and they actually eat until their stomachs can't hold anymore then regurgitate and keep eating. They will eat everything and have the capacity to eat anything that is up to 2" smaller than they are. This fish can live for up to 15 years and get up to 19" in length. Once she is a year old, a female lionfish will release two million eggs per year, which are fertilized by males, and carried through currents and tides until hatching. They are as far north as RI and as far south as Venezuela, as far to the sides as the Gulf and the Caribbean.
Lionfish are native in the Pacific. They are a non native and a big problem here in the Atlantic waters. They don't have any predators here, our fish don't know they can eat this fish, but they can; a Grouper is more than capable. As far as the Pacific species goes, we have 2 here. In the Pacific Ocean there are Groupers and Shark species that eat them; there is also a Pacific parasite that kills them, and we have the parasite here in the Atlantic but it hasn't developed to that yet. Eventually that will help and the fish will learn, but right now we (humans) are their only predator.
They are incredible. They are the most beautiful fish in the ocean. It is magnificent to watch them flair up.
Lionfish are venomous but they are not poisionous. Poisionous means it is throughout the body. Venom is only in a part. The venomous part of the lionfish is in its glands and its spikes, it is not in their entire body. The venom in the glands and spikes is not in the meat.
Lionfish are delicious. It has the texture of a snapper and the flavor of Hog Fish. When you order lionfish in a restaurant you are not only supporting a commercial industry but you are also taking a little bit of pressure off the other species.
The current belief is that the Lion Fish were released from someone who had them in an aquarium. The fish was eating everything in the tank so it had to go. No one likes to kill anything beautiful, so they just released it. It had caused a big problem on our reefs and in our ocean."
You can find Rachel and ask her questions on her facebook page:
https://www.facebook.com/rachelbowman3?fref=ts
Photo credit to Jerry Cowan
at 11:34 AM