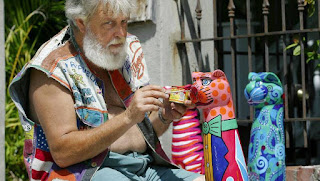 Story courtesy of Mike Jiminez; Yup, I used to live in the Florida Keys.
Immediately spring to mind—and pop and counter culture iconography.
Captain Outrageous operated a failed-but-now-legendary Hamburger Joint on White Street called The Last Straw. It was in this location (now the well-loved Mo’s Creole Restaurant) that “Captain O” began his reign of fame: The food was terrible but the art was great.
Photograph: Rob O’Neal, Captain Outrageous, ran for mayor of Key West and he led a number of Fantasy Fest parades on a custom-bicycle adorned with the head of a calliope horse.
In the 90′s Captain opened an art gallery on Caroline Street and was preparing to open a museum based on his art and his history this year as well as a “virtual world” online he called Outrageous World.
Outrageously, Captain Outrageous suffered a simultaneous stroke and heart attack on the inside steps of his own art gallery on the late afternoon of February 9, 2007. While evac’ed to Miami he never regained consciousness. He passed from this plane of existence the next day.
Captain Outrageous was survived by Widow Lady Outrageous who passed his cremated ashes to his friends, associates, admirers and locals in tiny hand-painted salt shakers. Gratefully, while Captain Outrageous is missed, Lady Outrageous continues to paint, develop, and evolve the Outrageous style. The lasting presence and demand for Outrageous art on the island is tribute to the grandiose impact on Key West of Captain Outrageous.
In his own immortal words, “Life’s journey is not to arrive at the grave in a well-preserved body but rather to skid in sideways, totally worn out, shouting: HOLY SHIT WHAT A RIDE!” 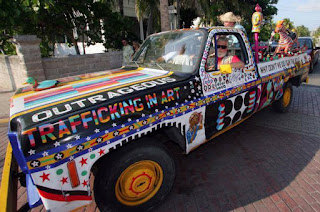