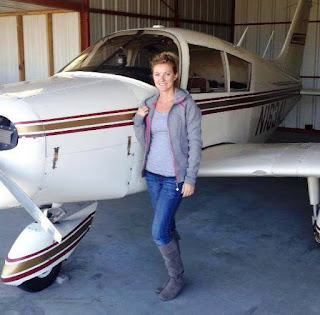 "I took my first flight lesson as a birthday gift when I was 15 years old. I remember the flight like it was yesterday. We took off out of New Smyrna Beach airport and soared into the wild blue. I was nervous, but it was exhilarating. Each summer thereafter, I would take a lesson when I visited my dad. I was hooked and from then on my eyes were always towards the sky.
I attended school for a year at Georgia state university in Atlanta. After that year I transferred to a community college nearby. I was also working at a David's Bridal as a consultant. One day a customer came into the store with her fiancé who happened to be a pilot. I mentioned wanting to become a pilot as well. I told him about my summer lessons with my dad. He told me about a reputable flight school in Jacksonville. He even went so far to give them a call, then he gave me their number and wished me luck.
When I got home that night I told my mom about the pilot I met and what he told me. Within months I was packing for my move to Jacksonville to attend ATP flight school. I was nervous and excited to move away from home and start a new chapter in my life.
I spent 7 months in school and received 7 ratings including commercial singe-engine, commercial multi-engine, and became a certified flight instructor for single-engine, multi-engine, and instrument. I flew across the country from Jacksonville to Las Vegas in a small single engine Cessna. At 20 years old I accomplished more than I ever dreamed of. I had lived completely on my own for the first time and became a professional pilot. Against all odds I had conquered the greatest fear of my life up until that point. The ratio of women to men at the school was about 1 out of 10. Also, I was the youngest in my class.
I went on to fly for the next 6 years as a flight instructor and commercial pilot. I flew all around the country. I flew plane for Microsoft aerial imaging and skydiving operations. I racked up almost 1200 flying hours I was living my dream.
I am now a mommy of two and haven't flown as a career in the past 5 years. Being a mommy is now my greatest feat. I hope to show my children that dreams have no gender. They can be whoever they want to be and accomplish anything they set their minds to. I will one day grace the clouds again. But for now my heart is at home with my kids and my eyes are still always to the sky dreaming of that first flight."
at 6:14 AM