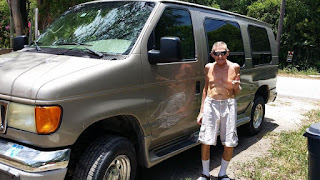 Ted's New Ride~ After being the "wheels" for anyone who needed to go anywhere in the Keys for all those years.
HOK: I went to check on Ted now that he has his new "ride" from a Humans Angel, Kevin. When we posted the story about Ted's car dying, the outpouring was amazing.
'Kevin" said his caregiver was looking over his shoulder and saw the story about Ted's car dying and told him that Ted used to take her child to school every day and her to work back in the days of the famous "Key Largo Transit", run by Ted.
He said right then, well, he can have my van, I need a new one and that was that.
Ted: "I never took people where they needed to go expecting anything like this. They didn't always have money to pay me and I was driving up and down this road everyday anyway. So, I took them.
I just can't believe it. It's the nicest vehicle I have ever owned. I can't believe Kevin just gave it to me."
at 9:05 AM

Email ThisBlogThis!Share to TwitterShare to FacebookShare to Pinterest
Labels: Ted