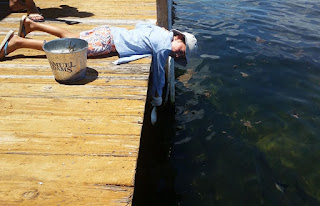 As we pulled up to Sundowners for lunch Sunday afternoon in Key Largo, there was a young man feeding the tarpon. I told him to lay down on the dock and hang the fish over, right above the water, and the Tarpon would jump up and get it. He did, and about 15 seconds later a tarpon surprised him from behind as it jumped and took the bait.
A little boy was on the dock watching and his face it up with surprise when it happened.
We sat down inside (where there is air conditioning!) and was watching a family outside at a table. It was the little boy. He was rummaging though his mom's purse as she was preoccupied on the phone. My husband thought he was looking for his electronics for entertainment. I knew exactly what he was doing.
After a few minutes he emerged from the purse with 3 one dollar bills in hand; he showed them to his mom, who was surprised and bent over to scoop up her purse and it's belongings. His face told me he was asking his mom if he had the three dollars right.
He then came in the restaurant and went to the servers station, waited patiently until a server appeared and asked "Miss, can I have some fish food?" as he held the 3 one dollar bills up.
The server disappeared for a few minutes and he waited patiently. She reappeared with a bucket and rubber gloves. He then walked back through the restaurant and outside, then ran to the dock to feed the Tarpon!
He was so fun to watch, such a kid, so full of curiosity, wonderment, and childhood that I just had to meet him, take his picture and tell his story.
Meet Joseph, he is 6 1/2 from France, but they live in New York. He is in the Keys and making the most of it!!
at 9:17 AM