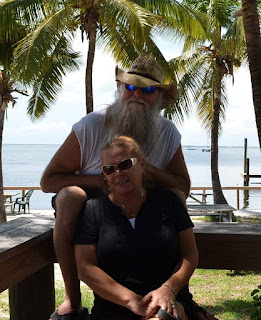 Luke and Kimberly Glenn, The Luke Sommer Glenn Band, Key Largo
Luke - “We used to live in Central Florida, and to make a long story short, we couldn’t make a living there; we had just gotten married and had a house but we couldn’t keep up with the payments. I said “F” it, let’s move to the Keys.”

Kimberly – “He was down here playing every month for a week and a half at a time already. We were spending more time down here than up there. J.R. Reeder, a.k.a Dad, was running Holiday Isle at night and he told Luke “son you could make a living down here playing music”, we needed to sell the house and move. “

Luke – “We had like 3 days to sell our house. The real estate lady said she didn’t think there was any way that was going to happen. We put it on the market and that afternoon she called us and told us she couldn’t believe it but she had sold our house.”

Kimberly – “We were packed and moved to the Keys 5 days later.”

Luke – “We lived in Key Largo Campground for the first 3 months, back behind Publix. It was awesome! We lived in a tent and saved our money. We had a friend on Windley Key that had bought himself a little travel trailer and he didn’t really like it so he sold it to us.

I am from Huntington, WV, but my family is from around Point Pleasant, WV. My mom’s family had a dairy farm so I spent summers on the dairy farm. My old man was one of the finest pickers I have ever known; he could play anything with strings on it. My mom wanted me to play the piano but I had no interest in it, you couldn’t travel and camp out with a big piano! She would jokingly tell me if she caught me with a guitar she would break both of my arms! I learned to play really fast; by the time she caught me I was too good to be discouraged. I would just sit and jam with music; I never thought of it as practice; I was like a kid with a video game, only I had a guitar.”

Kimberly – “He hears music and he plays it, he hasn’t had any musical schooling!”

Luke – “I met Kimberly when she was working at this little red neck bar in Sorrento FL, and I’m talking hard core red neck bar. I was on the road at the time and the band would be on the road for 2 – 3 months at a time and then we would take 10 days of, come back home, work up a bunch of new material and go back out on the road. We would go play at her little bar and try out all the new songs we had learned and figure out how well we learned them. She didn’t like the band very much because we always sucked when we played there; we didn’t have anything worked up at all, and one of the guys in the band had friends there so it was always a big party.”

Luke – “We played Sturgis for a while; camped out by the beer garden. We started playing Sturgis in 1994, before corporate sponsors moved in, when it was still really open and a big party. We played at the 50th anniversary. My favorite place to play, other than The Crib was the Saloon # 10 in Deadwood, South Dakota. That was an awesome place to be; great people. It was like Key Largo except for in the Black Hills. It was about a mile above sea level, and alcohol efects people diferent with the lack of oxygen. There was a big slab of concrete in front of the hotel and it was nice and cold. When we got drunk and got the spins, everyone would pass out on that big piece of cold concrete. We would go out there and chalk like them and take a picture of it. It was called the drunk front; and we all got caught in it!

Kimberly – “We have had some great times and a lot of fun! I think what we are most proud of though is the benefits we are involved in. We are part of a team that organizes benefits in Key Largo. We’ve been involved with many benefits over the years; then we met Callum and Lisa who have been instrumental in organizing. We all have a part and we get it done. The “Pirates on the Water” is another local group of fine people who volunteer whom we are fortunate enough to work with."

Luke – “The Crib has been way more than gracious. They let us use this space all the time. Many of the venues want money to use their venue, or they say we can use the venue but want all the food purchased from them; a quarter of the money is made from food! The Crib just lets us have the benefits, and you can’t get a more beautiful place. They even built us a nice stage with a roof and everything! The Whitehurst family has been very good to us, and really good to the community as well.”
Kimberly – “We like to do fundraising and we are good at it.”

Luke – “Well, when you know somebody is hurting and you can hand them an envelope full of money, and there are many envelopes, it is great! We don’t care to do corporate benefits. We have had a few people make comments about how we must do well organizing and throwing these benefits, but we don’t make any money! It’s about the community, we aren’t interested in making money for ourselves, it is all for the person or family hurting.

We couldn’t do these without the love and support here in the community and we want to thank everyone.” 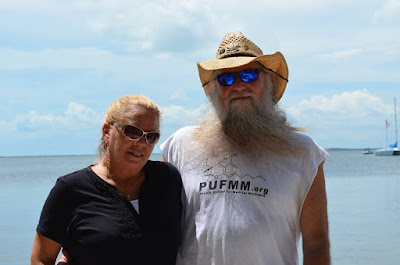