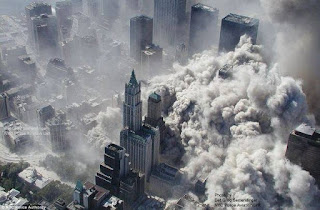 The most surreal weekend of my life.

I happened to be in New York 14 years ago on 9/11. We were producing a tv show for Michael Jackson at Madison Square Garden. It was the who's who of music and Hollywood stars, including Elizabeth Taylor, Marlon Brando, Britney Spears, Whitney Houston and countless others.

We had pulled an all nighter loading out the show and I closed my truck doors at about 8am, sent my driver away and crossed the street to grab some food and beer (don't judge me, it was a long day.)

Being 4 miles away and indoors, I was totally unaware of what was taking place 45 minutes later, until a friend called to see if I was okay. I turned on the tv just in time to see the second plane hit and the mayhem that ensued. In a matter of hours, the city went from madness to martial law and we were forced to stay indoors.

Our hotel was emptied, other than 7 MJ roadies, so that the government 3 letter jacket agencies and medical teams moved in. My room happened to be on the top floor, so I could look out and see the busiest city in the world turn into a bad zombie movie. Martial law kicked in and we stayed indoors for 2 days.

Having the FBI and CIA at the hotel gave us the inside track on info, but there wasn't much to know at that point. The things that I will never forget are:

The smoke and smell of the burning buildings and contents for days.
The empty streets of a city that never stops.
The thousands of people standing around the site in complete silence, once we were allowed outside.
The countless volunteers that joined us at the Javits Center to offer our services for whatever we could.