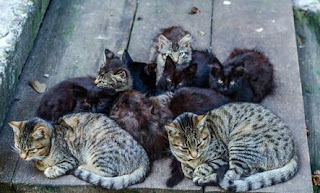 Sent from a reader:
I met a man named Bob at work. He is in his 70s and he is very sweet. Bob and I got to talking yesterday and he told me that he is one of the people that travels around Key Largo feeding the stray cats.
"I never had cats growing up, just dogs" Bob told me. When he began there were just 5 cats. Up until December 12, Bob fed 70 cats each day and knew every one of them by name. One day Bob went to his daily stops to feed the cats around Key Largo and to his surprise there were 17 cats missing.
Apparently when cats are captured, they are supposed to be taken to the local humane society or shelter in case someone has lost a pet, however Bob has checked the local shelter and they claimed that there have been no cats released to them. Bob wants to know what happened to his cats. He is under the impression that they were taken illegally.
During Bob's routine feedings, he told me that he has been stalked, harassed, spit at, and even dealt with physical altercation with a young man in his 20s.
Bob is absolutely devastated that someone could possibly be so hateful in destroying his cats. He claims that some of the cats are neutered/spayed and "they aren't harming anyone."
Bob wrote a letter to get his word out. He speaks of one cat in particular, Heidi. I think he wants people to see that these aren't just stray cats to him; they are family. Bob feels and an obligation to look after the cats.
Bob would like his letter to be shared as much as possible.
"Over the weekend of December 12, 2015 at least 17 cats disappeared from the Tradewinds Plaza Shopping Center at Mile Marker 101. . No one at the plaza knows who did it or why. One of the missing cats is Heidi. I fed Heidi every night for the last four years. When she would finish eating, she would look up at me and meow.
I felt that she was saying thanks for feeding her.
I will never see this beautiful cat again because of the hatefulness of others. If anyone has any information regarding the cats, please call me at 305-451-4798.’’
Thank you,
Bob Smith, Key Largo