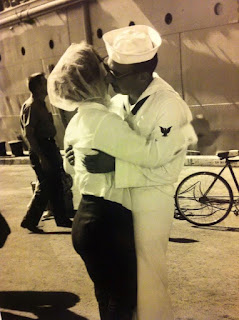 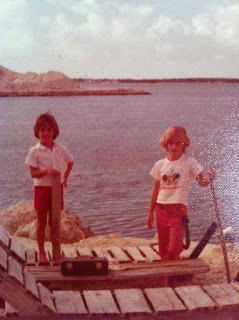 My parents met at the port in Charleston, South Carolina. My mother worked at a local tavern, and my father was a sailor on a submarine tender The Bushnell. My father was shipped to Key West as the Cuban Missile Crisis began; my mother followed by land and I was born a little more than a year later in Key West on Dec. 24, 1963. I’m a true "Conch." My parents decided to stay in the Keys, favoring the climate to any they had known previously. They were both used to much colder weather, mom being from Crossville, TN and dad from Long Island NY.
Early on I remember we lived on Lowe Street in Tavernier, in one of the Red Cross houses. I recall walking to the end of the street with my little sis Donya in tow and always ending up in the ocean. We had these two cats we adopted when they were stray kittens. We dressed them in doll clothes and carried them around like rag dolls; we even went into the water and swam with them! We climbed trees like they were our monkey babies, and they began to cling to us wherever we went. They would even jump into the sea when we were there walking in the shallows collecting starfish. (I remember back then the small half dollar sized brown starfish were everywhere!)
Once, on an inshore breezy day, the man-o-war were drifting ashore, and Donya (4) and I (8) thought they were pretty so we collected a bucket full and carried it back to mom. We suffered for days from the stings of their brightly colored tentacles! That was one of many lessons we learned about the beauty and danger of sea life. Dad and mom would teach us many more; taking us on outings regularly to Tavernier Key, Elliott Key, Nest Key and many more adventurous places where we would "skump" around the mangrove hammocks searching for treasures like sea beans and old bottles. Donya and I had the best times out there on the water.
My mom then had another child, my brother, Joseph. It was then that my parents decided to purchase their first piece of property in Hammer Point. It was one of the first sold and groundbreaking had not yet begun. Daily we would go to Harry Harris Park for showers and fill gallon jugs with water to take back to our bay front property for drinking, cooking, cleaning, etc. until the county came to hook up the utilities. It was like camping.... For months, with the best sunsets, swimming and fishing ever… for a kid!!!!
Me and sis fished off the dock and caught little snappers and Mom would cook them for us. In the evenings we would hop the boulders on the shoreline with our gigs, flashlights and buckets and gig lobsters for dinner. I actually purchased our first boat from Mr. Herald Albury, founder of the Tavernier branch of the Post Office, with lobsters! Grandpa Herold, as we called him, had this small old wooden vessel in his garage alongside his home and I would always eye it on my parent’s frequent visits. One day he caught me eyeing the boat and asked if I wanted to buy it?
I said, "Yes Sir, but I don't have any money."
"Well," he said, “I believe I'd like some of those lobsters your mama has been telling me about you girls gigging."
So there an accord was struck for our first ship! A fee of 100 lobster tails to be paid as we could catch them; when the number 100 was met, the vessel was ours! I upheld my end of the deal with a big help from my sis. Soon, Donya , Joe and I were venturing offshore on our own behind Hammer Point, exploring little islands as far off as Pigeon Key. Mom made us snacks in bags; dad would get gallon jugs of water, throw cushions, oars, etc. and lash everything together. That was a great idea because on one outing, the entire transom, engine and all, fell off the boat! It was only attached by the gas line! I made Donya (6) & Joe (2) get to the bow of the boat for weight, while I jumped in the bay, retrieved the small engine, and then rowed the kids all the way home! We brought lobster home though!
As we grew older and went to different schools, our lives seemed to become different as well. At 13 I decided to get an after school job; so my first job was at Tavernier Town in a new store called "Island Silver & Spice." It was originally where the Dollar Store is today! My little sis Donya (8) continued alone every night hunting the lobsters.... She was relentless and a great hunter!
at 2:00 AM