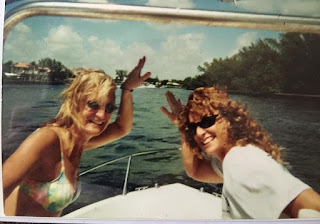 When I was 14, I got a job at Plantation Yacht Harbor, bussing tables. My mom worked there in the lounge, so when I got out of school in the afternoon, I would get in my boat, fly through the bay to PYH, work till about 9:00 pm, then get back in my boat and skate back home in much the same way. I knew the backwaters like the back of my hand. Most "Conch Kids" did. Later, at 15, I would work at the original Marker 88 Restaurant for Andre Mueller. He was a tough employer, but a great teacher, and there I learned to prep many of his fine dishes and made 6-8 Key Lime pies and 125 Key Lime baked Alaska’s each day! I still know those recipes…..
It was 1979 and I was getting fed up with the high school clique thing, so I found out when the next GED test was being given. On that day, I skipped school, took the test, and then went about my life as usual for the next few months. Then one day a letter arrived, addressed to me. It was my results from Tallahassee. I had passed and I never went back to Coral Shores High School.
I was 16 and out of high school. A friend from work, Rhonda Smith, decided to buy and live on a sailboat. We made the journey to Key West to purchase and sail her north, and so "The Witchy Woman" had her new home, and so did we, down the docks on Bimini Row behind the Original Tiki Bar at Holiday Isle. PARADISE.
Every morning my roommate Rhonda and I would awaken to the sweet smell of banana bread freshly baking. Miss Marty Quann had a tiny bakery on Bimini Row called "The Lovin' Dough." She made the sweetest breads, muffins, and the best conch fritters west of the Bahamas. We would jump into the sea to bathe, then hose off on the dock with fresh water. We used the bathroom at the bar for our own facilities. Rhonda tended to the resorts aviary during the day, sometimes I helped her clean and feed the many parrots there on the property. We would sun and swim during the afternoon, and roam the docks talking to the fishermen about the day's catch; we usually ended up with a nice filet for our dinner. By night we both worked at the restaurant with several other friends. After work, depending on the time of the year, we would walk next door to HOJO's for either cold ice cream, or hot clam chowder. Then back down the docks to Bimini Row to the little yellow sailboat called "Witchy Women." Our PARADISE.
That was my life for over 2 years. In 1981 I got a different job working just north of Tavernier at a bar called Jimbo's. It was very different and a bit scary.... My friend Rhonda had sold her boat the "Witchy Woman" and had moved back to Maryland. So I lived, again, with my parents. I wasn't crazy about it, and I don't think they were crazy about me working till 4am. Jimbo's was owned by the Burgin family at that time and the nightly band there was "The Jim Burgin Band." That's where I met the drummer..... (The man had great rhythm.) It wasn't a long relationship and I found myself to be a single mother of an amazing baby girl in February, 1984. Shannon was always a curious, expressive, bright-eyed, angelic child with amazing white hair.... a true island towhead baby, and the love of my life. Her father was great with her; he took her on weekends and always helped us when we needed it.
Always with my love for the ocean, I took my baby girl across the pond to the Bahamas for the first time when she was only 2 weeks old. That was the first of many crossings for us. We lived with my grandmother in a house my father built in Hammer Point on Aberdeen Court, on the bay, after my grandfather passed. (You know that one thing you regret in your life? For me it was ever leaving that house.) I was always teaching my girl about fishing and ships, but she had a love for mermaids.
As Shannon grew, she became an amazing artist; this tiny child could draw anything! Mermaids were her forte’. However, she was having difficulty reading, and I was advised to enroll her in a MAGNET program. But the trouble was, there were none of those available here in the keys back then. So, I said, “Dade County here I come!!!” I lived in a house my parents owned in Kendall and enrolled her into the MAGNET program. She blossomed academically, and her artistic abilities got even more amazing.
I was still caring for grandma who just couldn't come to terms with ATM's; she thought I was robbing a bank or a store every time I utilized one. "You're gonna get caught one of these days," she'd say. It was her Alzheimer's that ultimately prompted me to study medicine. I found a school near my daughters, enrolled myself and attended classes; ultimately ending up with an Associates of Science Degree in Cardiovascular (CVT), X-Ray Tech certificate, and Lab Tech certificate. I was promptly placed with a local physician, Dr. Oscar Hernandez, and pretty much ran his back office. I did most of the diagnostic work myself and assisted him with other procedures. I was always learning new things and getting more certifications, and I loved it! 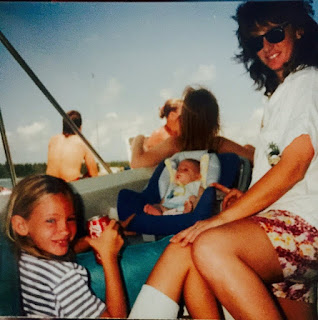