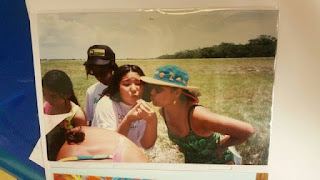 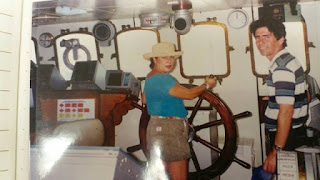 I was chosen to be a Lead teacher for Project Seas, (an Education Grant through the Marine Science Dept. USF and Fla Institute of Oceanography) and taught on board a research vessel from 1989- 1997.Along with 33 other teachers I learned from the best research scientists, through a 2 year grant that allowed me to work on my science degree. I taught hundreds of teachers at Sea and on land from Layton to Marathon to the Dry Tortugas and back. My final project was to create a program that would encompass hands on learning and bring meaning to science and research into the classroom.
The beginning of The Oceanography Camp for Girls 1991- at the University of South Florida Marine Science Bayboro campus.
I proposed a grant possibility to the Science Director for Pinellas County that would encourage girls entering 9th grade to select courses in science that would not be limited to just biology or environmental science. I wanted to include Chemistry, Geology and Physics as part of a summer camp that would incorporate all the of the components of Oceanography. With the help and support of the Florida Institute of Oceanography and all of the professors and grad students at Bayboro USF Campus the Oceanography camp for Girls received a grant from the State for 25,000 dollars for a two week camp. For the next three years that I spent running the camp the grant jumped to 250,000 dollars, doubled the time and resources and organizations as well as the research vessels that made it possible for students to learn at Sea. The camp is still going strong after 25 years.
While teaching at the high school, running a camp and raising a family, I would also spend time teaching teachers. In 1996 my husband was once again transferred, this time to Dade County. I had to leave the school, the camp and explain to my 3 high school and now middle school that we were going to live in the Keys. 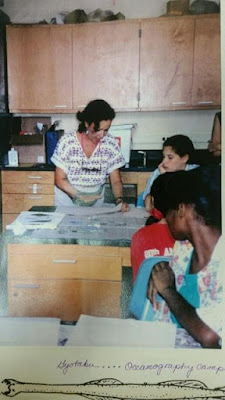