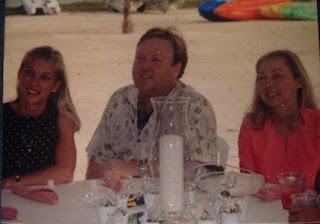 We lived at Holiday Isle until I was five or six years old. My grandfather, Ed Goebel actually built Holiday Isle. My dad, Terry Gardner, worked there and we lived on property in one of the rooms. For a kid, that was amazing! My brother Chad was 14 months older than me, and we thought it was fun growing up at Holiday Isle. We had friends who came back to the resort every year. We knew people from all over the world, because they stayed at the resort. We remained friends with a lot of them all of our lives. Chad and I were in the first commercial for Holiday Isle; playing on the beach. I wish I could find a copy of that! 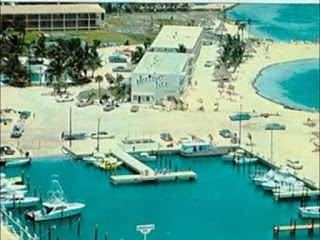 "Holiday Isle before the Tiki Bar was built"
They called all of us kids who lived there the “Dock Rats.” We were always wearing our speedo bathing suits. I must have owned about 7 of them; one for every day of the week! It was all we ever wore, because we were always in the water. We only had to put on real clothes if we were going somewhere. We were always outside, going on excursions and adventures. We never just sat in the house and watched TV. There was just so much to do outside; exploring the mangroves, swimming, fishing. There wasn’t much here at that time. I mean, really. My grandfather would say to us kids, “Here’s a quarter, go play in the street.” And we did! We would play out in the middle of US1, and sometimes it would be hours before we would see a car. There was just no traffic.
Our big treat was to go to Mr. Pete’s Ice Cream Parlor for ice cream and hamburgers. It’s where the Shrimp Shack is now. We loved Mr. Pete’s! Irene & Georges’ was our department store; it was where Island Silver & Spice is now. Upstairs was the toy department, and we loved to go up there and hang out! That was a lot of fun. The Trading Post was the only grocery store we had for years. There weren’t a lot of options…no McDonald’s or Burger King at that time. My uncle moved down and he and my dad built a burger place on Bimini Row, so we had that for a while. I remember when the Howard Johnson’s opened up next door to Holiday Isle, I used to love to go over and eat their fried clam sandwich...it was the best thing ever. It’s funny the things you remember!
I was 4 or 5 when we got our first boat. We used to go out to the sandbar, and there was nobody else there. We were out there all the time. I remember one time, I was out by myself and the engine died. I just waited until somebody came by and towed me in. There were so few people here, everybody knew everybody, and they all helped with each other’s kids. That was just how it was. Everybody looked out for us kids, everybody helped raise each other’s kids!
We ended up moving out of Holiday Isle, and up to Tavernier near the airport. I went to Kindergarten at Coral Shores because it was the only school at the time, K-12. Then I want to Key Largo School for first grade; Coral Shores became the high school and KLS opened as the elementary school. Before I started 2nd grade, Island Christian School opened, so I went there for second and third grade. And in fourth grade, PKS opened. The Keys were growing fast about that time… we went from 0 to 100 just like that! I can’t believe the changes in that short time. 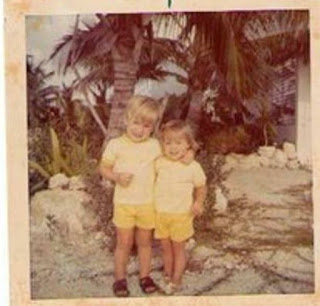 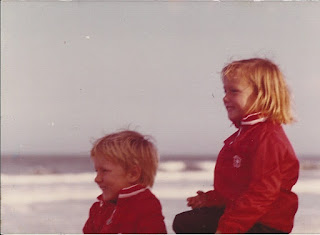 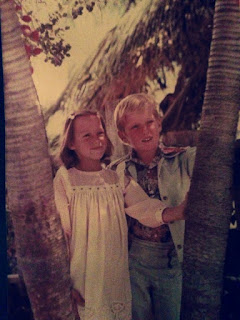 Then my mom decided that she didn’t like the education system here, and decided to send Chad and I away to boarding school. If you can believe this, they enrolled us in The Flint School, a live aboard sailing boarding school. Can you imagine putting your 10 and 11 year old kids on a ship to travel the world?! But that’s what we did. There were two boats; the TeVega, a two masted schooner, and the TeQuest, a three masted schooner. We sailed the Mediterranean Sea for 9 months. I went to 27 countries that year! I guess you could say we grew up a lot in that year. We had been pretty sheltered in the Keys, and then all of a sudden, we realized there was a big world out there and we saw and learned things we didn’t even know were going on. It was kind of scary. There was a lot more to life than deciding which speedo to wear that day.
The next year, we came back to Florida, but not the Keys. I went to an all girl private school, and Chad went to an all boys school. I didn’t do well at the girl’s school. I wanted to be home with my family. By that time, my parents had divorced and my dad moved to Oklahoma. So, I went to live with him for a while when I was about 12. Then I came back to the Keys in 7th grade. Funny story - everyone’s favorite teacher at PKS was Mrs. Brown. She taught me and Chad, she taught all four of my kids, and now my daughter has her job!
I have four wonderful children; Casey, my oldest son is 27; my daughter Alicia is 23; daughter Caitlin is 17; and my youngest son, Devin, is 16. I call them my “Fab 4.” 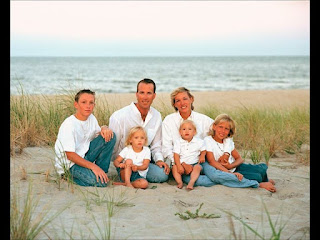 Chad was always so involved with my children. I used to joke that I had to have four kids to give my mom her grandchildren, two for me and two for Chad, since he was never going to have any! I did the books for Chad from the time the deli first opened. I remember for a while, I was taking classes at Miami-Dade north campus, getting my associates degree in travel and tourism. I would drop my two youngest kids off at Chad’s Deli early in the morning, because he was always there early making the bread. He would watch them and get them on the school bus for me. He helped me out so much. He loved all of my children, and always did things with them. They loved their uncle.
I was closer to Chad than anybody else. We were just always together growing up. But, at the end we actually weren’t speaking to each other. We had a falling out a few years ago…had a disagreement and I never got to fix it. I’ll never forgive myself for that. That is probably the hardest part for me, knowing I never got to make it right.
It was such an incredible shock to me and our whole family when we lost Chad. We were just literally devastated...total devastation. Who would even imagine? I mean, he was 48 years old. I was in bed when I got the call from my son that night. He told me Chad had suffered a heart attack and I just couldn’t believe it. He said we needed to go say our goodbyes. I did get a chance to say goodbye. He was on the machines, and they said there was no brain activity, so I don’t know if he heard or knew I was there. But, I was holding his hand and telling him how sorry I was and how much I loved him when my daughter walked in. She said, “Look mom,” and pointed to Chad’s face. There was a tear running down his cheek. I think he heard me somehow and I’m going to hang onto that.
Right after he died I was numb. But one night, about three days later, I was looking at some old photos and I realized that nearly every one of them was of us together. There weren’t pictures of just him or just me, they were all of the two us together. There were so many memories. He had been my everything. My mom even dressed us alike when we were little! I always thought I would have time and then he was just gone. It was just so final.
I was overwhelmed and I started screaming to God, “Why? Why him? He was such a good person. Why him?” I was just so angry and I had to get it out. Then all of a sudden, I felt this calm wash over me; just like that, I felt peaceful. I’ve never had a feeling like that, to go from so angry to that incredible peace. It felt like Chad was there with me; like he was holding me, letting me know he forgave me and that it was going to be okay. It really felt like he was there with me.
Life is so short. I called everybody I knew and told them I loved them and thanked them for being in my life. I never got the chance to tell Chad “thank you” for everything he did for me, and I’ll always regret that. Don’t take for granted that you’ll always have time. Don’t wait, do it now. 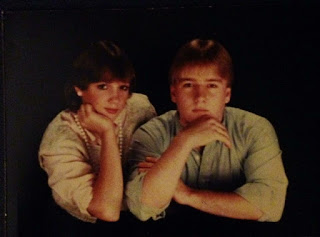