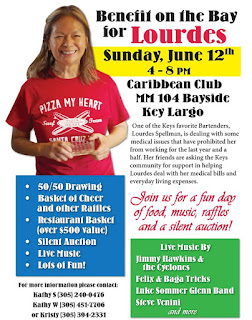 Written By Steven Harris, Lourdes Fiancée
"For those of you who don’t know why Lourdes’ friends are having a benefit for her, I just want to let you know what happened.

A year and a half ago, she came home from a concert and, though she was entirely sober and hadn’t had a drink for eight hours, she slipped and fell on our tile floor and hit her head. I didn’t wake up and find her for over eight hours and, though she had crawled to the couch, she could not sit up and she was vomiting profusely.
I took her to Mariner’s where her brain swelled so much her eyes bulged out and pulsed with her heartbeat. They ambulanced her up to the brain ward at Baptist Hospital in Miami where they discovered that she had fractured her skull and had a brain bleed. After several days on morphine with bags of ice piled on her head, during which she mostly slept, she was able to get up and use a wheelchair, then walk with a walker for a few feet with help. (Thank you Kathy Whitehurst for being there for us and keeping an eye on her when I had to go home). The doctors moved her to a rehab place where she relearned how to fold laundry and water plants, make lists and cook meals. They worked her up to longer distances with the walker, and then shifted her to a cane.
After a week there, she came home and was on morphine for severe headaches and had severe vertigo and double vision, and for months she couldn’t lay on her back and she had to get up so slowly due to vertigo and nausea that it took her thirty minutes to shift from horizontal to sitting on the bed. With physical therapy, she relearned how to get out of bed, and how to walk and turn her head without waves of nausea. She was on the road to recovery, keeping a positive attitude as only Lourdes can.
Four months after the fall, she went out to California to take care of her mother who has lung cancer and was going through radiation and chemo. Lourdes doesn’t complain, so I hadn’t realized how badly the fall had damaged her vision until she told me on the phone that she had been talking to a mailbox. Her mother helped her buy glasses, and she could see again.
Then, she had a seizure. The doctors saw that her sodium levels were going down to dangerous levels. It turned out she had SIADH and Hyponatremia due to damage to her pituitary gland which is the boss of all glandular activity, likely caused by the fall. (Thank you Dr. May for diagnosing this rare syndrome). This means that her sodium and electrolytes wash out with just a little liquid, which affects the osmotic balance in her cells and can cause stroke and seizure and damage the brain, kidneys, and liver. Limiting her liquid intake was the solution at first, and, for months, she could only have three glasses of liquid of any type (including fruit) daily or she could seize again. So she could not really go outside or do any exercise, she was dehydrated and her kidneys were at risk, and all she could think about was water.
We tried to find a way to increase her intake. Lourdes is on a drug that helps her hold onto her electrolytes, and she is up to five cups of liquid per day. But the drug can effect the liver and can make one susceptible to C. Diff, and the syndrome is only partially managed. We visited doctors in Boston, too, who suggested a treatment we are pursuing as the most likely long-term solution, but it is experimental, expensive, and few doctors know how to use it because it’s so tricky to manage and the syndrome so rare.
Lourdes has not been able to work for a year and half. We have been getting by (Thank you Sharon Archer for helping shoulder the burden). We are downsizing and limiting our expenses, but we’re circling the drain. Her friends put together this benefit for her. Lourdes knows this situation is not exclusive to her and that many struggle with far greater loss and difficulty, and she is moved with gratitude (as am I). This community is part of Lourdes’ heart and is her dear family."