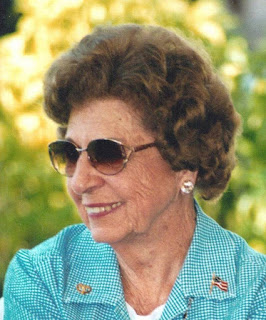 Sylvia Sadowski Puto wasn’t a sailor, didn’t play golf, wasn’t a diver. What the Marathon resident was was deeply involved in her community but, more importantly, matriarch to one of Marathon’s pioneering families.
Mrs. Puto, 97, died Monday, June 27, peacefully in hospice care at her home in Marathon Shores, with her children Mike and Chris by her side. Her daughter Christine Puto-Murray and husband John Puto had preceded her in death.
“Mother was always proud of her children,” Mike said. “She also played a major role with grandpa Phil” Sadowski, one of the early developers of the Middle Keys and for whom the Sadowski Causeway in Key Colony Beach is named.
Mrs. Puto spent her time doing volunteer work, primarily with Fishermen’s Community Hospital and its auxiliary, and the San Pablo Catholic Church Parish Altar Society. She was the one who documented their activities through her camera lens, perhaps the reason Mike is attracted to photography.
“She was the picture lady,” Mike said. “Mother trained me well. She did all of that, got 3 by 5s made and distributed them. That was her fun time.”
It was her children, though, that she was most proud of. Chris is a Vietnam veteran and longtime college educator and now serves as president of Spring Hill College in Mobile, Ala., from where he graduated. Christine was an attorney and child advocate in the Guardian ad Litem Program. Mike is a former Marathon fire chief and city manager, former county commissioner and a volunteer on countless boards.
Mrs. Puto was born on June Feb. 2, 1919, in Detroit, Mich. At the University of Detroit, she met her future husband John. They moved to Marathon in 1949 and Mrs. Puto managed the dining room and coffee shop at the family-owned Key Motel.
They later owned Western Auto and, following Hurricane Donna in 1960, opened the Marathon Auto Supply Co. under the Big A Auto franchise.
READ THE COMPLETE ARTICLE AT:
http://www.flkeysnews.com/news/local/article86599592.html
at 6:59 AM

Email ThisBlogThis!Share to TwitterShare to FacebookShare to Pinterest
Labels: RIP