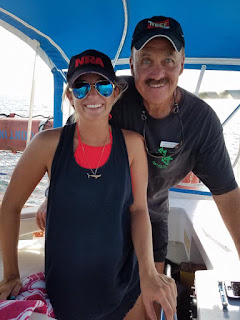 I was born and raised here in the Keys and I don’t plan on leaving. I work at Slates Dive Shop, for Captain Slate, who is also my father. I started when I was young, working in the shop and helping out. I got certified as a diver under him when I was 11. Now I have my 50 ton captain’s license, and my plan is to continue the business.

I want everyone to know what a great man Captain Spencer Slate is. He’s my dad, my boss, he does so much for this community, and he is the best man I have ever known. One of the reasons I think he is such a good man, is not only has he had a successful business for 40 years, but he is also a wonderful father. I’m actually his step daughter, and now my parents are divorced, so I’m not even legally his step daughter. But he’s still my dad. He had me since I was 3, and he’s been the best parent I could ever have asked for. I turn to him for everything, from girl issues to business issues; he’s the one person I have always been able to rely on. And, I’ve tried to follow in his footsteps. I decided I wanted to be just like him!

My Dad says he grew up watching ‘Sea Hunt’ in the late 50's early 60's and like most kids at the time, he became mesmerized watching the wonderful mostly never before seen underwater world. He got a paper route in Jr. High to save money and buy a regulator, and then rented tanks from a farm supply store, and in 1963 he jumped into a local rock quarry in North Carolina that was 90 feet deep. He says he was hooked from the first breath underwater and continued diving in N.C. until he moved to Florida in 1972.

When he was asked for a dive card at a dive shop in Jacksonville, Florida, he said he didn't have one. They said he had to have a certification card, so he signed up for his first class and became an open water diver. From that moment on, he was diving every weekend and within three years became a SCUBA instructor and was given the job of SCUBA Training Director at the Jacksonville YMCA.

He was a high school teacher in Jacksonville and dove all the north Florida Springs as well as offshore. When he got his USCG Captains License, he ran a friend's dive boat. But, whenever he could, he dove in the Florida Keys. He would drive down pulling his 18' boat, camp out and dive every Christmas and Easter break and all summer long. In 1978, he quit his teaching job and borrowed $50, 000 from the SBA and opened Captain Slate's Atlantis Dive Center in Key Largo.

He has served as the Chairman of the Board of Directors for the YMCA SCUBA program for 17 years, been a member of the BOD of NAUI for 4 years and has written dozens of articles and stories about diving with his critters and how we must protect our seas and all it creatures. He was the project manager for the Spiegel Grove for 8 years; he brought the ship from Norfolk, VA to Key Largo and sunk her in 2002. He was a founding father of the Keys Association of Dive Operators in 1984 and the founding father of the Florida Association of Dive Operators in 1986, and currently serves as president. He was inducted into the International Scuba Diving Hall of Fame in 2004, and it is my goal is to do the same one day!

Captain Slate says, “Those of us who were founding fathers in our wonderful diving industry have a mandate to do all we can to introduce all generations, past and future to the unbelievable, wonderful, vibrant underwater world; a world that all can enjoy, love and protect. There is no more beautiful a place to be than underwater.”

Even after 50 years of diving, unlike most dive operators, he still dives and drives the boats. I admire him for everything he’s done in the community. He has such a big heart, and he has been so great to me. I don’t know what I would do without him. He really took me under his wing. When I told him I wanted to be a boat captain, he said “Ok, work on my boats.” And I did! He was always tough on me, but he taught me so much. I can change my own oil; I can work on a diesel engine. He is a great role model!

Unlike most "normal" families my brother and I HAVE to go out diving every Easter and Christmas. At Easter, my dad dresses up as the Easter bunny and hides eggs around the reef for all the children! And, on Christmas Day he dresses up as Santa Clause and we all go out to the Christ Statue. That is just a normal holiday for the Slate family! My mom and Slate are also best friends for the sake of the kids. We are very lucky to have him in our life, as well as our beautiful mother, of course!

When I was 8 or 9, I would get in trouble for talking back to my mom or to Slate, and I would get grounded for it. My “grounding” was to work on the dive boat. That was my punishment, to be stuck out on the dive boat all day! It’s funny that it was my punishment and it turned out to be my career and what I love! My Dad definitely helped form me as a woman. I’m very confident and I owe that to him. He has guided me on my path to becoming who I am. We are a lot alike, and we do butt heads sometimes! When we are out on a charter together, it’s pretty obvious that I’m his daughter! He picks on me, but it’s all good. I’m a Daddy’s girl. We are a good team!

A few weeks ago, we were out on a dive, and he was doing his Creature Feature, which is where he plays with the animals wearing chain mail. Well, I was showing off…I was free diving and kept going in his bait bucket, and I got bit by the moray eel. It was pretty bad, I had to get stitches. When I came up on the bridge of the boat after it happened, I was thinking he was really going to yell at me, but instead he said, “There she is, there’s my girl. You finally joined the club!”

I just want everyone to know what an amazing man Captain Spencer Slate is, and that I am so proud to call him Dad. He deserves recognition for everything he has done and continues to do every single day.
at 6:55 AM